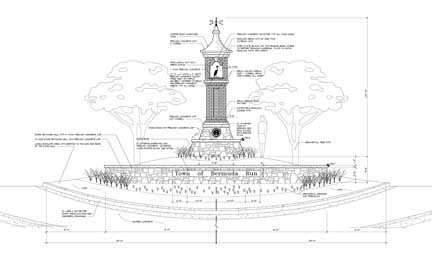 When the long-awaited roundabout on US 158 entering Bermuda Run finally comes to fruition this year, it will feature an obelisk in the center.

The addition wasn’t part of the original draft, but town manager Lee Rollins said the 15-foot obelisk, one of the first in the state to be constructed in a roundabout, makes sense for Bermuda Run.

“As a result of the adoption of the Comprehensive Plan in 2012 and the desire to enhance, where it is economically feasible, the visual identity of Bermuda Run and Davie County, the town felt the obelisk was a natural extension of that goal,” Rollins said. “From a functional standpoint, the obelisk provides a visual break to aid in slowing vehicles down as they enter the roundabout.”

By definition, an obelisk is an upright four-sided pillar that gradually tapers as it rises and typically terminates in a pyramid.

There is a stone base and retaining wall with a 12-inch diameter “Town of Bermuda Run” seal etched onto a bronze plate, topped by a vertical brick column that leads up to the cupola with a copper roof and a weather vane at the summit. It will be surrounded by a lawn and landscape area.

The obelisk was designed by Scott Miller of Miller Landscape Architecture in Winston-Salem. Rollins said that cost for the obelisk will be about $40,000.

Certainly, it will provide an alluring image to those drivers crossing the bridge over the Yadkin River on U.S. 158 into Bermuda Run.

“We will have a very attractive obelisk as you enter from Clemmons into the town,” Rollins said. “DOT is actually beginning to encourage things like this so that you don’t see through (the roundabout), which is actually safer.”

Rollins said that the only other obelisk that he is aware of is in Cramerton, a small town in Gaston County.

“For our division, this is one of the first,” he said.

As for the roundabout, the town is waiting for approval from NCDOT to seek bids. Although Rollins said he was hesitant to provide a specific timeline for the start and completion of the project, summer appears to be likely.

With the roundabout being constructed at the Bermuda Run entrance across from BB&T Soccer Park, Rollins said that could be good timing for the soccer complex as activity starts to slow down in June.

Rollins said once work begins on the roundabout, at least one lane of US 158 will remain open until it is completed.

And with the addition of the obelisk, Bermuda Run continues to find ways to bring focus to the town brand and identity, according to Mayor Ken Rethmeier.

“The idea is that as one of the entrances ways into town, and because of the roundabout, it’s a great opportunity to try to set the stage for the village environment,” he said.