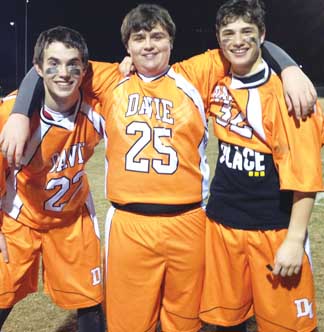 The scene was straight out of a movie – a happy, feel-good movie. Just two games into the first-ever varsity lacrosse season at Davie and the War Eagles are in the win column.

They overcame a four-goal deficit at the half, forced overtime late in the fourth quarter and emerged with an 8-7 overtime victory at West Stokes last week. When Nick Juhasz provided the game-winner in the sudden death OT, the War Eagles were smiling as if they’d just won the lottery. The celebration was deserved. In the season opener, they watched St. Stephens celebrate a 12-11 OT decision.

“It’s good to get a win under your belt because now it gives us more enthusiasm and really shows them that we’re able to play with these teams,” coach Brett Hewitt said. “We’ve got several other teams on our schedule that are going to be that same level (as W. Stokes). I hope we finish them off a little bit sooner than overtime, but we’ll take it.”

Foss Smithdeal and Juhasz scored two goals each. Davie got one from Austin Thomas, Ryan Robinson, Matt Carr and Corey Tilley. Smithdeal had three assists, Carr two and Thomas and Tilley one each.

For most of the game, it didn’t appear Davie’s first win would come at West. The Wildcats led 4-1 after one quarter and 6-2 at halftime.

But Davie rallied within 7-5 in the third. With two seconds left in the period, Robinson’s first goal of the season gave Davie considerable momentum going into the fourth.

“Ryan is a defensive-minded guy,” Hewitt said. “He told me in practice: ‘Coach, don’t make me have the ball on offense. I’m defense.’ I felt like that was the most significant goal. It really picked our team up and got us the momentum. He’s not a guy we expect to score, but he came down and took a great shot.”

Davie struggled to find shots in the fourth. Finally, with five minutes left, a Smithdeal-to-Carr connection tied the game.

“They recognized that Foss was a good shooter, and they came up to play him at top center,” Hewitt said. “Carr made a great cut around the goal to the crease area. It was a high pass, but he jumped up and caught it and put it in the back of the net with the goalie out of position.”

After West’s goalie made a save early in OT, Davie goalie Sam Fletcher stepped up to save the day. He made three of his 11 saves in OT.

“I gave the game ball to Fletcher,” he said. “He was over 60 percent on save percentage. He made a save, but we just couldn’t clear it and we turned the ball over. He made another save. The team was going nuts after the last two saves.”

Then it was time for Juhasz to seal the deal. After he converted a pass from Carr, Davie bathed in euphoria.

“It was an outside shot, but it was a nice, hard shot,” he said. “He pretty much blew it by the goalie.

“Everyone played and contributed in the game. Every single person got in the game for at least a couple rotations.”

Among the unsung heroes were freshman Jacob Rogers and senior Zac Baker. Rogers was moved to a position he had barely played all season, long-stick middie, and he played it efficiently.

“He has played (long-stick middie) in youth but he hasn’t practiced there at all, except for about 10 minutes the day before the game,” he said. “We lost one of our defensemen, so we had to do some moving around. We had to move Rogers to long pole the day of the game and he did a great job. He was on the wing on faceoffs and he came up with a couple ground balls.”

Baker was valuable on defense.

“He hadn’t been starting, but he got the start at defense and played the whole game,” he said. “It was good for him to be able to step up after not getting much playing time in the first game.”