Loyal To The End 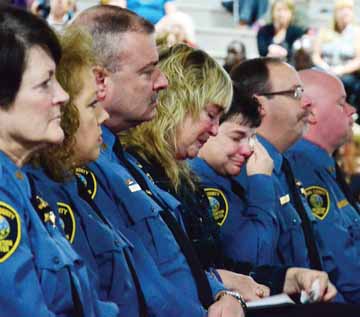 Led by Sheriff Andy Stokes, and with a white hearse in the middle – they passed underneath a huge American flag draped over US 601 South by volunteer firefighters. Firefighters and law enforcement at intersections saluted.

Once in the high school parking lot, those in the procession could hear dogs – lots of dogs – special dogs.

It was a memorial service for Gorky – the Davie County Sheriff’s Department K9 officer killed in the line of duty. K9s and their handlers from more than 17 departments were there to show their respect. They came from as far as New Bern and Henry County, Va.

“It is simply beyond words for us to be able to express our appreciation and support,” Stokes said.

He went through the seconds of the incident in which Gorky was shot.

Gorky did what he was trained to do. He saved the lives of sheriff’s officers. Mortally wounded with a shotgun blast to his front, he went to his officer and best friend – Sheriff’s Cpl. Chris Fleming – himself wounded by gunfire from the suspect and the sheriff.

“They bled together,” the sheriff said. Gorky died later that night at an animal hospital.

“Dogs have been called man’s best friend. Gorky was Davie County’s best friend … and a critical part of the sheriff’s department.”

K9 officers volunteer for the job – a 24-hour-a-day, seven-day-a-week job – knowing that in times of extreme danger such as the one on Jan. 22 – they are the first to face the danger.

Stokes went on to thank the numerous individuals and businesses in Davie County who have shown support. It boosted his and his officers’ morale.

“They are the first to go in,” Prevette said. “They are involved in more armed conflicts than most SWAT teams.”

For the dogs, working is fun.

Gorky loved to work, Fleming said. Sometimes he would turn in circles on the way to the patrol car, excited to go to work.

“The more time you spend with these dogs, they become part of your family. Gorky and I became a team. I understood Gorky and Gorky understood me,” Fleming said. “He was always excited to go to work.”

Gorky, he said, was a bad guy’s worst enemy. Yet he was gentle enough that Fleming could take him to elementary schools to be around young children and educate them about his work.

“If not for Gorky, the funeral today would be for me. Most will never understand the bond we had. Gorky was like a best friend to me,” Fleming said. “Gorky was a warrior and he went out as one. He was loyal to the end.”