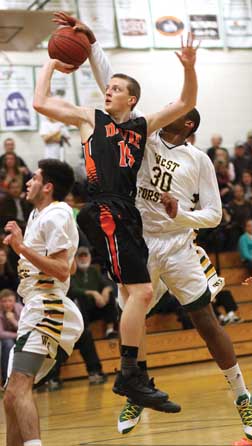 Peyton Sell’s tying 3-pointer from the right corner – the exact spot where he connected for the unforgettable game-winner against Mt. Tabor in the 2013 CPC Tournament final – had the home crowd thinking about a storybook ending for the senior and the heart and soul of the Davie boys basketball team.

But the basketball gods wouldn’t cooperate as visiting Parkland escaped 72-70 to put a damper on Davie’s Senior Night.

“I couldn’t be prouder of them,” coach Mike Absher said after Davie fell to 4-19 overall and 0-11 in the Central Piedmont Conference. “We asked everybody to pull for each other and play with a sense of urgency. And boy, they did. We did everything but win the game.”

In the first of three games last week, host North Davidson limited Sell to a season-low seven points – about 13 under his average – and defeated Davie 74-57.

North never blew the game open, but it had little trouble improving to 12-8, 5-4.

“Davie is a much, much better team than they were the first time we played them,” North coach Sammy Staten told The Dispatch. “Kudos to them for getting a lot better. But we’re getting better, too.”

West’s 21-9 first-quarter lead set the tone. Davie trailed by 16 at halftime and by 21 after three. Sell hit 11 of 12 free throws to score 13 points. Starnes and McDaniel had eight each.

Coming into Senior Night against Parkland, Davie’s closest CPC game was a 12-point home loss to West. But the War Eagles reached down and found a ton of grit and fortitude to make it a down-to-the-wire game.

That’s after Davie dug a 13-2 hole in the first quarter. It went on an 11-3 run to close the quarter – and then it was game on. Slabach and Starnes combined for four 3-pointers in the half to keep Davie within striking distance at halftime, 39-33.

The Parkland lead reached double figures in the third, but Davie battled back to 58-51 by quarter’s end.

After Holden Poole yanked down a defensive rebound, Blaise Bennett scored on a putback, was fouled and converted the free throw. Now it was 66-65 with 3:02 left.

That set up a frenetic finish.

“Numerous times we fought for extra possessions and got loose balls,” Absher said. “We got second and third opportunities, and we were able to capitalize on them.”

After the Mustangs committed a pair of turnovers, Davie inbounded under its basket. Sell drained a triple from the right corner to force a tie at 70 with 1:15 to play.

“When he caught that ball, I had such a flashback to Tabor a year ago in the conference tournament,” Absher said. “And it caught nothing but net. I was visioning a steal or turnover on their next possession.”

After Sell tied it, Parkland spread it out and milked the clock. With time running out, Jejuan Davis, the lefthanded point guard who finished with 12 points, went on the attack. He pulled up around the left elbow and got a friendly roll, scoring with 1.6 seconds left.

“We felt like he would be the guy who ended up shooting it,” Absher said. “He made a good shot. You’ve got to give him credit for making a tough shot at a tough time.”

Absher called time. McDaniel was the inbounder. He fired a bullet to Sell at midcourt, but they failed to connect and the clock expired without a shot attempt.

It was a heart-wrenching ending for the War Eagles, who honored seniors Sell, Nathan Colamarino and Kendell Cunningham before the game. Parkland improved to 7-15, 3-8.

Davie certainly left everything on the floor. It just wasn’t to be. “They did the smart thing by putting their biggest guy on the inbounder,” Absher said.

Sell went for 19 points. Starnes scored 16, his most since a 20-point showing in the Sam Moir Christmas Classic. Slabach had three 3s and 11 points, hitting double figures for the fourth time. Bennett (11) turned in his highest total in eight games.

“In the second half, we didn’t have many bad possessions on offense,” Absher said. “We had a lot of great first looks. We moved Peyton around and put him on the high post. That worked well against their man and zone. That was a nice adjustment we made.”