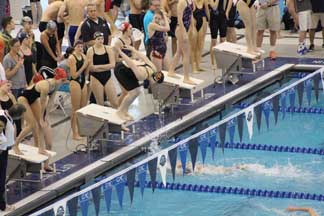 Eight Davie swimmers – four from the boys’ team and four from the girls – are headed to the state meet after Davie’s solid performances in the 4-A Central Regional at the Greensboro Aquatic Center on Feb. 1.

The individual state qualifiers and their events: Wood (50 free), Sinopoli (200 and 100 free) and Sink (100 fly and 100 Breast). The boys’ and girls’ 200 and 400 free relays qualified. The members on those relays are Wood, Gantt, Sessoms and Stillson from the girls, and Sinopoli, Mebel, Little and Sink from the boys. Davie will be swimming in nine events this Friday in Cary.

In the 200 free, Davie had Shoaf, Wyatte Copeland, Cam Fearrington and Sinopoli swimming. Shoaf dropped time and was able to score for Davie, finishing 16th.

“I was real proud of her because she moved up in her seeding,” coach David Koontz said. “Considering she had just swam in the medley, she would have probably swam faster. She’s a tough competitor, though, and we are lucky to have her for three more years. Katie also swam in the 100 fly. For a freshman to qualify in two individual events just says how good she really is.”

For the boys in the 200 free, Sinopoli finished fourth, Fearrington 18th and Copeland 20th.

“For the second year in a row, Sinopoli absolutely killed the events he swam,” Koontz said. “He was fired up today and dropped almost five seconds in the event. He was less than a second away from a podium finish. Cam and Wyatte had strong swims, and they both hit the goals they were trying to reach.”

Sessoms swam in the 200 IM. Koontz said she did a great job to score with a 14-place finish, and she dropped time as well.

Next in the 50 free, one of Davie’s strongest events, Wood, Gantt, Stillson and Mebel all swam beautifully for Davie. Wood finished fifth, which punched her ticket individually for the state championship.

“Not only did they all record their best times of the season, it really built up some confidence for them and removed the butterflies,” he said. “All of them had two relays coming up, and we kept telling them that today was their day.”

Sink finished 8th in the 100 fly, dropping almost a second and securing a spot in the state meet. He also swam in the 100 breast, where he finished 6th.

“Jacob was a workhorse today,” he said. “The crazy thing was that he had decided to opt out of the 100 breast since he had qualified in the 200 free relay and the 100 fly. He wanted to focus on the 400 relay and help his teammates get another relay qualified, and then at the last minute he changed his mind. Needless to say it was a good move. Now he will be swimming in four events at states.”

In the 100 free, Davie again had a stacked lineup with Wood, Stillson, Gantt, Sinopoli and Little. All five dropped time and swam excellent. Sinopoli finished fifth, which qualified him for his second individual event at states.

In the 500 free, Fearrington and Hunter Thurlo competed for Davie and achieved their lowest times of the season. Fearrington dropped more than eight seconds, and Thurlo dropped a little over a second. “Always good to see improvement no matter how much it is,” he said.

In the 200 free relay, the boys and girls finished in the top eight to qualify. The girls (Wood, Gantt, Sessoms and Stillson) were seeded 12th, but “we knew they were faster than that,” he said.

They responded with a bang, winning the second heat and finishing sixth by beating three teams in the fast heat. The guys (Sinopoli, Mebel, Little and Sink) finished eighth and dropped almost two seconds.

“Both relays set a school record in this event, but I bet it will fall again this Friday,” he said.

The same combination of swimmers also swam in the 400 free relay. The girls were able to finish eighth and the guys finished 7th – with both earning state qualification.

Amanda Brechko, Sessoms and Mebel all swam in the 100 back. Sessoms and Brechko finished 13th and 21st, respectively, out of 24 swimmers.

“Sessoms dropped time and won her heat,” he said. “Mebel had more success, swimming one of his best times of the season, and continued his success in an event he really didn’t swim much until this season. He’s really improved his backstroke this year.”

Overall, Koontz said he could not be more proud of the kids.

“They represented their school very well,” he said. “We will travel Thursday night to Cary to spend the night and get up early Friday for the meet.”

The preliminary session will be in the morning, and the top 16 finishers in each event will advance to the finals that night.

“I think we have a shot to get to the finals in some of our events for sure,” he said. “Regardless, they are all winners in my book already for getting there.”