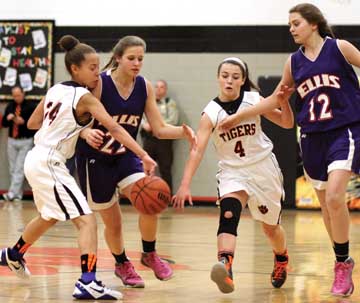 The South Davie and North Davie girls basketball teams were running out of time to accomplish something memorable in their struggling seasons.

Both were headed for same-song, different-verse losses last week. Then both wound up enjoying one-to-remember Ws.

Fourth-quarter heroics by Morgan Lewis and Kam Parks lifted South to a 27-24 upset of visiting Ellis.

The Tigers were definitely due and deserving of a breakthrough. They had lost by one to Oak Grove, by one to Lexington and by one to Ellis. They were 2-11 in the all-time series with Ellis. But they outscored Ellis 13-7 in the fourth to improve to 3-10. This was huge; their only other wins were over N. Davie and Lexington, which have three wins between them.

“This is one you won’t forget, especially for the eighth graders,” South coach Dustin Myers said. “This was their last game at home and it doesn’t get any better than this one. After you have so many of those close (losses), eventually one is going to go your way.”

The Jaguars came ready to play, ending the first quarter with an 8-3 lead. They led 12-8 at the half. It could have been a bigger lead, but they missed six of eight free throws.

South inched a little closer in the third, 17-14. In the fourth, Ellis seemed poised for win No. 9, which would have tied the school record for victories, as they held a four-point lead in the final two minutes.

But a flurry by Parks, Sydnee Coleman and Lewis allowed the Tigers to walk away victors for just the third time against Ellis.

Lewis, a seventh grader who didn’t score in the first three quarters, buried a 3-pointer to cut Ellis’ lead to 23-22. The timing couldn’t have been better for Lewis’ first trey of the season.

“After that, everybody on the floor was smiling,” Myers said. “They were ready to play. Morgan usually plays the four spot down low, but due to foul trouble, I had to bump her out to the three position and the defense didn’t rotate over.”

Lewis’ big shot set up high drama. Then Parks took over. Parks, who didn’t score in the first 18-plus minutes, grabbed an offensive rebound, scored, was fouled and hit the free throw to give South a 25-23 lead with 20 seconds left.

A sixth South player rushed onto the floor as Parks was getting the and-one, a technical foul was assessed and Ellis’ Emma Slabach hit one of two to draw the Jaguars within 25-24.

But Parks, who scored six points in a matter of seconds, came through with two free throws to give South the 27-24 lead. Coleman scored four of her team-high nine points in the decisive fourth. Liz Crenshaw finished with five.

“Parks is a hustler,” Myers said. “That’s how she gets her points. She’s a go-getter every play. She never takes a break.”

“She took over in the last 1:30,” South assistant Germain Mayfield said. “She also got six of our last seven rebounds.”

The last three South-Ellis games have been thrillers, with the games decided by a combined seven points. Ellis had claimed the previous two. A 1-3 slide dropped Ellis to 8-5.

“Our defense is what really turned it around,” said Myers, who changed from man to zone in the second half. “We finally got some stops in the fourth. And after Lewis hit that 3, we were ready to go then.”

North Davie trailed visiting Lexington 17-8 at the half, but the Wildcats put together an astonishing turnaround and won going away, 32-22.

Trish King, the 18th-year coach, breathed a sigh of relief as North earned its first win in 12 games.

“I wish I had a video of our first week of practice compared to where we are now,” King said. “To have gone through a season with no wins up until now and still remain positive in practice and games says a lot about the character of this team. We may not have a team filled with talent or athleticism, but we definitely have a team with a lot of heart and integrity. I could not be more proud of a group of young ladies who have worked and kept a positive attitude through all the adversities we have faced.”

The first time the teams met, Lexington cruised 31-18 behind 22 points from Sophie Peoples. North was playing without top scorer Desiree Lewis in that one. Lewis was back for this one, and she was back in a big way.

Lewis, who had three points at halftime, took the game by the throat in the third. Her eight-point barrage fueled a 13-2 run that vaulted North to a 21-19 lead.

Lewis wasn’t done. She scored six more in the fourth to engineer an 11-3 burst for the Wildcats, who outscored Lexington (2-11) 24-5 in the second half.

Lewis hit nine of 16 free throws to finish with 17 points. For good measure, she blocked seven shots and yanked down several rebounds.

“The difference in this game and our first meeting was we hit 13 free throws while they hit two,” King said. “We also had Lewis playing this time.”

Bridgett Tierney, who was second for North with five points, was a big impact on the defensive end. She took on the assignment of guarding Peoples and held her to eight points. Emma Allen and Katelyn Huff scored four each.

“Tierney did a great job handling Peoples in a box-and-one,” King said. “She did the same thing in the Ellis game, playing man-to-man on Slabach and holding her to 12.”