K-9 Loyal To The End 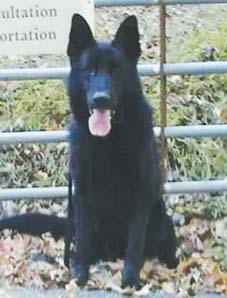 He was loyal to the end.

Last Wednesday Davie County Sheriff’s Department Deputy Chris Fleming and his K-9 partner, Gorky, began what was to be their final patrol together at 7 a.m.

At 3:30 p.m. they would be dispatched to an incident involving a suspect who had taken two hostages and was refusing to surrender to officers.

Fleming was treated for his injuries at a nearby hospital and released Friday.

Gorky died hours after the incident.

On Monday Fleming was back at the sheriff’s office.

He wore a sling for the injured shoulder where he was shot and still bore the marks of the birdshot that had hit him in the face after Gorky was fired at by the suspect.

Fleming was back at the sheriff’s office for one reason – to discuss plans for a remembrance service for his fallen canine.

Gorky was one of four K-9 officers with the sheriff’s department and the only one to die in the line of duty in Davie County.

“We want Chris’ input on how he wants his partner to be remembered,” said Sheriff Andy Stokes.

Fleming, 26, had worked with Gorky, a 5-year-old Russian Shepherd, for the last three years.

Fleming recalled what happened the day of the incident when he, Gorky and other officers entered the trailer where the suspect was.

“I let Gorky off the leash,” Fleming says.

The canine rushed down a hallway to the bedroom where the suspect was.

“Gorky turned at the wall and that’s when the firing started,” Fleming said.

Gorky was hit twice by the suspect and Fleming was hit in the face by birdshot.

“I feared for my life at that point and time,” Fleming said. Fleming ran into another bedroom in the home and broke through a window.

That’s when he was fired at by Sheriff Andy Stokes, who mistakenly took him for the suspect.

“It happened so quickly,” Stokes says. “It’s the most regretful thing I’ve ever done in my law enforcement career.”

Fleming says when he hit the ground Gorky, who had walked out of the trailer, wounded and bleeding, came to his side. “When I jumped out the window Gorky found me and stayed with me until the ambulance arrived to take me to the hospital.”

Gorky was transported to the hospital by another deputy.

“You don’t realize until something like this happens how dedicated these K9 officers and their dogs are,” said Stokes. “If these dogs are available they’re going in first and that officer is going to be second. Had it not been for Gorky we’d be having a service for this officer, not his canine.”

Fleming says Gorky was like a child to him – a member of the family who came home with him after their day’s work ended.

And though his faithful friend and partner is gone, his memory remains. “If it weren’t for the vest I was wearing and my dog I wouldn’t be here talking to you. I know if he hadn’t taken those shots. I would have.” Fleming pauses for a moment, then says: “He was a really good dog.”