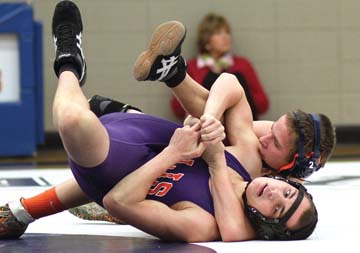 In the first North Davie-Ellis wrestling showdown, North rolled 66-30. In last week’s rematch at North, things looked very different. This time it was Ellis that administered the pain, with the Jaguars turning the tables 49-37 as the teams wound up sharing the regular-season championship.

“The guys really wrestled well,” said Ellis coach Jason Hooker, who is 72-10 in seven years as the only coach in school history. “My kids adjusted to the stuff they needed to adjust to.”

“We just didn’t get enough points where we needed to,” said North coach Jamey Holt, who is 21-2 in two years. “It was two good teams. It’s fun to have that kind of atmosphere.”

Ellis had no trouble with visiting Lexington, winning 72-24.

Next, Ellis breezed to a 95-3 decision over visiting Thomasville.

South Davie got the monkey off its back with a come-from-behind 45-42 win over visiting Thomasville.

Clubb’s pin at 180 sparked an 18-0 run at the end that erased Thomasville’s 42-27 lead. After Clubb pinned, McAfee came up with a third-period pin. It ended with Thomasville forfeiting to Robertson.

South got revenge for a 53-36 loss in the first meeting.

Although the Tigers lost 54-42 to visiting Lexington later in the day, it was much closer than the first matchup (72-30).

In Round 2 of the Ellis-North showdown, the Jaguars jumped to a big advantage, led by as many as 27 and clinched with three weight classes left.

Ellis snatched nine of 16 weight classes, and it held a 6-4 advantage in pins/forfeits.

“It was a good match,” Hooker said. “That’s how it should be – tough matches like that. Hopefully South will get back to where they used to be. We should all be splitting if the kids are doing what they’re supposed to. It should be tight ever time. It makes a good atmosphere and makes for a good match. When you’re beating people 80- and 90-something to nothing, the kids don’t learn anything and it’s no fun.”

Budd’s 12-7 decision and Vandiver’s pin trimmed North’s deficit to 16-9. But Ellis seized six of the next nine matches to build an insurmountable 49-22 cushion.

“We had some guys that got pinned last time that wrestled really well and could have won,” Hooker said. “Those types of things are what played a big impact. We worked on not getting pinned. That was the big thing.

One difference this time around was North not having Luke Bolmer, who was 9-0 with seven pins. He moved to South Davie after Christmas.

“I thought we were pretty even,” Holt said. “But in places where we needed pins we didn’t get pins. And in a couple tight matches that could have gone either way, Ellis won.”

Now it’s back to the drawing board for the Wildcats. With the season series 1-1, bragging rights will be on the line in Saturday’s conference tournament at South Davie.

“I told them now it comes down to the tournament,” Holt said.