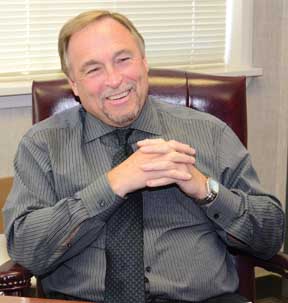 Cecil E. Wood has two goals as he serves as the interim Davie County manager through June.

As directed by county commissioners, Wood is making sure all work is done so that residents can vote on a bond for a new high school in May. And he’s already started on next year’s budget, with department heads getting instructions on getting their respective budgets ready for inspection.

Although he’s new to Davie County – he’s not so new.

A native of Wilkes County, he took his first job in the planning department there in 1977 after earning a degree in political science from UNC Chapel Hill. His mentor was John Barber, a Cooleemee native who lives in Bermuda Run and served two times as Davie County manager.

Wood is a former manager for Yadkin County and the Town of Lewisville, and has served as interim manager in Wadesboro and North Wilkesboro.

“Davie has a good reputation and I think people will be interested in applying for the job here,” Wood said.

He won’t be one of those.

He and his wife help care for aging mothers, and since his wife retired, he doesn’t want to be the only one in the family with a regular job. He is working by the hour, as needed, in Davie County.

The job of county manager comes with some tough tasks. Sometimes they have to tell people no who aren’t accustomed to hearing the word. Sometimes an interim manager can be more courageous – giving opinions based on the facts and not the politics.

“I don’t know the history of issues … no preconceived opinions,” Wood said. “I can state my opinion which hopefully will be the obvious … guided by the dictates of the board.

“I still enjoy an association with the operation of county and town governments. You get to have some influence on policy matters that shape a community.

“We will try our best to do what the people want and what the board dictates,” he said.