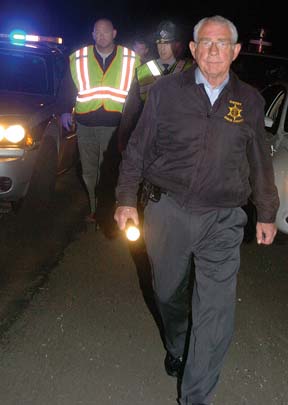 A teen and a woman apparently killed themselves last week, one with a gunshot wound to the head and the other by jumping off the US 601 bridge onto an I-40 crowded with Thanksgiving traffic.
On Nov. 27 around 5:45 p.m. officers responded to the bridge on US 601 that crossed Interstate 40.
“They were responding to a call that a woman on the bridge had stepped over the railing,” said Chief J.D. Hartman.
Hartman said that a Mocksville Police Department officer was the first to arrive. Minutes after his arrival other deputies arrived but before those officers could exit their vehicles the woman jumped onto the eastbound lane of I-40 and was struck by a vehicle, according to Hartman.
Hartman said that officers ran to give assistance but that the woman was dead upon impact. She was hit by a vehicle, but that vehicle didn’t stop.
Julie Lookabill, 31, of Junction Road, Mocksville was pronounced dead at the scene and the interstate was closed for what Hartman called a short period of time.
“It was a tragic, tragic event,” Hartman said. He wouldn’t say whether she left a note or how she got to the bridge.
•
Five days earlier, on Nov. 22, a report of a missing person was received at approximately 11:20 p.m. from a home on Myers Farm Trail.
Officers responded and spoke to two residents at the home who said that their roommate, who had moved in only a week ago, told them she was going for a walk but had not returned, according to Hartman.
“Her roommates had tried calling and texting her but go no response,” Hartman said.
Hartman said the officers began searching the area and found the body of 19-year-old …