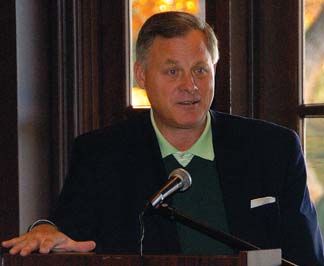 Changes In Store For Veterans Administration

BERMUDA RUN – Sen. Richard Burr was in his element on Veterans Day.
A room full of hometown patriots listened as he talked about changes in store for the Veterans Administration. After breakfast, it was time for a round of golf with those patriots.
The event sponsored by Bermuda Run Country Club drew well over 100 people, said Ken Rethmeier, retired Navy captain, newly-elected mayor and organizer of the event.
As the ranking member of the Senate Committee on Veterans Affairs, Burr said the VA is long overdue a new look and attitude, going away from a few large hospitals to smaller medical centers closer to where the veterans live.
“It’s challenging,” he said. “We have three generations of warriors. The services we provide are very different for each. We’ve got to provide the best healthcare we can for every generation.”
The VA has to change to do that, he said. Major announcements should happen in about six months.
“We must change the culture of the VA. Instead of hearing ‘Why did you call?’, we want it to be, ‘What doctors do you need to see … we’ll try to do it all in one day’.”
A 300,000 square foot VA medical center in …

By Mike Barnhardt Enterprise Record Lillie Mabe’s biscuits are famous. If you haven’t tasted one, either you’re a newcomer or... read more