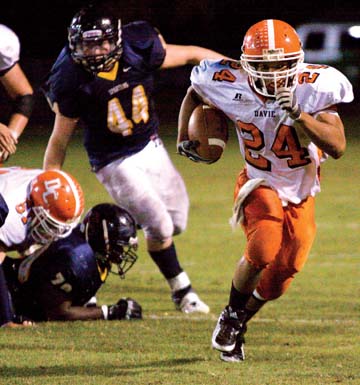 WINSTON-SALEM – With Mt. Tabor trailing 28-25 and two and a half minutes to play, the Spartans faced fourth-and-35 at its 46-yard line. They couldn’t possibly overcome fourth-and-35, but they did.
Two Davie penalties reduced the distance to fourth-and-10, and Tabor quarterback Mike Eldridge ran and got the first down by an inch or two. Eldridge reached the end zone four plays later to hand Davie’s football team an excruciating 32-28 loss on the road last Friday.
Davie coach Doug Illing bemoaned a 15-yard unsportsmanlike conduct flag that turned what would have been fourth-and-25 into fourth-and-10. The loss in the first-place showdown ended Davie’s six-game winning streak and dropped the War Eagles (6-3, 2-1 Central Piedmont Conference) into a tie for second. Snatching victory from the jaws of defeat, the Spartans, who are ranked No. 4 in the state in one poll, moved to 8-0, 3-0.
“You hate to see the striped shirts get involved at the end of the game like that when kids are playing their guts out,” Illing said. “A kid is frustrated with (a holding penalty) and probably said something he shouldn’t have said. But sometimes a referee’s got to realize it was out of frustration. You hate to see referees not understand the spirit of the game and the competitiveness that these kids had. In the heat of the moment, you’ve got to let that go.”
The end tarnished remarkable performances by Davie’s Adam Smith (191 yards on 11 carries), Stephon Smoot (134 yards on 20 carries) and Jamal Lackey, who delivered one of the best games you will ever see by a defensive lineman.
“He’s a warrior,” Illing said of Lackey. “He was flying sideline to sideline. Whether the play’s to him or away from him or down the field, he’s finding ways to get to the ball. He’s phenomenal. His effort is just endless. That kind of stuff rubs off on other people.”
Revenge was sweet for the Spartans, who suffered a 30-29 overtime loss to Davie in the 2010 playoffs.
“Thank God we got a penalty or something,” said Eldridge, who …