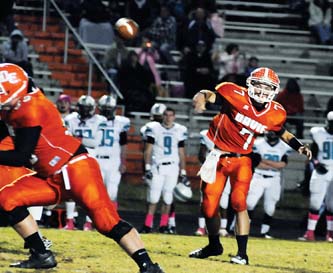 The Davie football team’s mood improved dramatically in a week’s time. A 32-28 loss at Mt. Tabor on Oct. 14 was a wrenching low. But last Friday’s 28-17 home win over Reagan turned Davie’s frown upside down.
For not only did Davie take care of business on Senior Night, it moved into a three-way tie for first place thanks to West Forsyth’s harrowing win over Tabor, 36-27. North Davidson dispatched Reynolds 28-10, and Davie, North and Tabor are all 3-1 in the Central Piedmont Conference heading into the regular-season finale.
“I told the coaches Sunday that West could beat Tabor, especially coming off that emotional win against us,” Davie coach Doug Illing said. “The kids didn’t come in holding their heads down. They were more determined than ever to come out and win. They’ve put themselves in position to have a conference championship that we haven’t had in several years (2007 was the last).”
Reagan fell to 3-7 and 1-3. Davie improved to 7-3 overall.
•
When Tabor disarmed Davie’s passing game, Adam Smith (191 rushing yards) and Stephon Smoot (134) enabled Davie to roll up 325 rushing yards.
Reagan paid heavy attention to Davie’s ground game, stacked the box and left Davie with no running room. It didn’t matter. Smith simply demonstrated his immense passing talent, throwing for 298 yards and four touchdowns. It was a masterful, 15-of-22 performance with no interceptions.
“Two linebackers they’ve got are studs, and then they’re rolling the safeties into the box behind them,” Illing said. “We had a tough time running it. I don’t think we’ve played two better linebackers. They gave us the throw, and we’ve got to take what they give us …