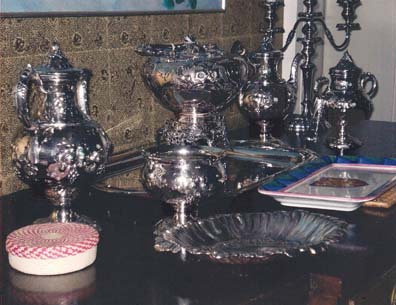 An estimated $150,000 in historical artifacts were stolen from Cooleemee Plantation this weekend.
The plantation has been owned by the Hairston family since 1817. According to Davie County Sheriff’s Detective Sgt. Scot Kimel, someone broke into the plantation house on the evening of  Oct. 2.
• at 10:56 p.m. the phone line of the home was cut and the suspect(s) hid and waited to see if the alarm would activate;
• at 11:49 p.m. the alarm to the siren was cut;
• at 11:56 the suspect(s) entered the home through the dining room window and remained inside the home until 1:15 a.m.
According to Kimel the suspect(s) remained in the master bedroom and dining room only. “They obviously knew where what was.”
In the dining room the suspect(s) were selective, Kimel said, and took solid silverware while leaving behind anything silverplated.
“They took a 12 piece set of spoons made by Paul Revere in the 1700s,” Kimel said.
A large service set from the Civil War era was also taken.
In the master bedroom the suspect(s) went through drawers and took pocket watches a …