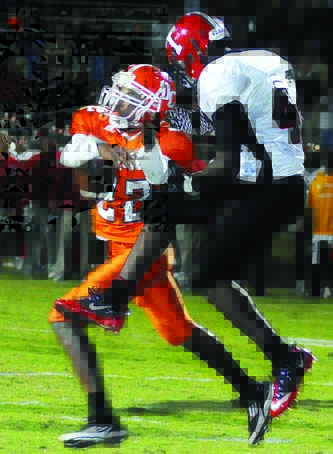 The Davie football team’s dramatic 22-17 win over Thomasville here Friday proved that a player doesn’t have to be a star to help his team win. He doesn’t even have to be a starter.
Kurtis Banner was an improbable hero. The backup safety who was thrust into action when Caleb Mathis went down with cramps intercepted a pass in the end zone with less than two minutes left to clinch the win.
Another backup player, outside linebacker Trevon Faulkner, helped the War Eagles get the type of rugged victory they will need to contend in the Central Piedmont Conference.
“You never know when your opportunity is going to come to make a play, and here’s Kurtis Banner,” Davie coach Doug Illing said. “He broke on a ball earlier and missed it. But there he is to make a play and steal one for a victory. What a tribute to that kid. He’s put in at crunch time and he steps up and makes a big play. That’s just awesome.”
Faulkner played the game of his life, making three special plays in the second half. After making a one-handed interception, he foiled two Thomasville plays on the Bulldogs’ final possession.
Banner and Faulkner helped spoil Shaquan Johnson’s 224-yard rushing performance.
“We hadn’t tackled that cat all night on the toss sweep, and there is Faulkner sticking him for a 2-yard loss,” Illing said. “That was huge. Huge. We had gotten on him because he missed a tackle on their big kickoff return. Then he comes up and makes that kind of play. So I’ve got to think twice now about (changing) the kickoff team. He didn’t put his head down. He got back in there, stuck his nose in there and made big plays.”
The War Eagles’ third straight win lifted them to 3-2. The Bulldogs’ fourth straight loss dropped them to 1-4. While Davie jumped around in celebration after Banner’s pick, the Bulldogs walked off in exasperation.
“We can’t get a break or make a break,” Thomasville offensive coordinator Dickie Cline said. “We’re driving down for the winning score and they flagged the bench …