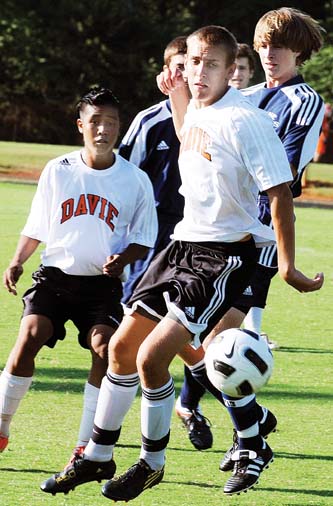 The Davie varsity soccer team waited a long time for a moment like this. After the first of three matches last week, Davie was 2-0 for the first time since 2002. Davie tied the next two opponents, but it is four matches into the season and still without a loss.
Davie notched the first 2-0 start in nine years when it defeated the Forsyth Home Educators 3-0 at home. Two Alexis Hernandez goals were sandwiched around a goal by Bryce Bartelt. The scoring duo had one assist each.
“Alexis and Bryce were up front this game, and Bryce is really good about creating and getting whoever is up front the ball,” coach Lance Everette said. “So I thought that would be a good combination.”
After Jessie Ramirez handled the goal-keeping duties in the first half, Everette put freshman Jorge Hernandez and sophomore Richard Salgado in goal in the second half. All three played mistake-free.
“I got every single goalie in the game to kind of see what they could do,” he said. “The other two goalies could really help us. Jorge made a tremendous save, and Salgado made two really good saves toward the end of the game.”
A 2-2 tie at Forbush was a positive sign for the War Eagles, who trailed 2-1 at halftime.
“I definitely feel good about being able to play with them,” Everette said. “We dominated the whole second half. I mean we just passed the ball so well.”
Sergio Fernandez’s first goal of the season – off an assist from Alexis – gave Davie a 1-0 lead in the first five minutes. After Forbush surged to a 2-1 halftime lead, Eddie Rodriguez tied the score. Fernandez assisted Rodriguez’s first goal of the season …