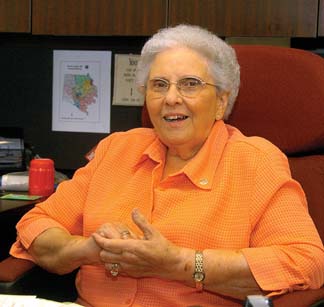 More than three decades ago Margaret Shew became Davie County’s Director of Elections.
At the end of the month Shew, 77, will retire with 33 years service and countless memories and stories of elections gone by.
“It was 1977 when I came on board,” Shew says as she sits in her office.
At that time Janet Davis had retired as election director and three people applied for the job: Shew, Shirley Hanes, and Glenda Brown.
Shew remembers her job interview was conducted by three members of the board of elections – HC Gregory, BC Williams, and Hank Vanhoy.
“I was pretty active in the community and the democratic party,” Shew recalls. “And I worked as a clerk in the Calahaln precinct.”
She wasn’t initially hired for the job. “Shirley actually got the job and in August of that year her brother had an accident and she went out … I was contacted to fill in.”
That was the beginning of a career in elections for Shew and by July of that same year she was put on the payroll.
“The only reason I even applied for the job was because Paul came in and told me it was time I got on a payroll instead of doing all this volunteer work.”
Paul is Shew’s husband of 56 years and retired barbershop owner in Cooleemee …