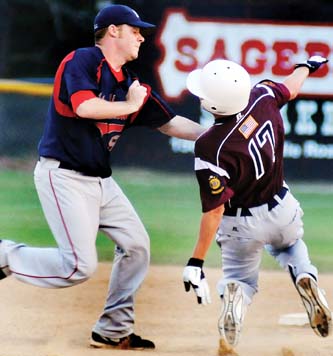 Maybe the battery had to recharge.
Connor Bodenhamer went 0 for 5 with three strikeouts in his Mocksville American Legion baseball debut. He was 2 for 14 after four games. Since then, however, Bodenhamer has done a 180, going 8 for 12 over three games, including a 4-for-5, six-RBI, two-homer performance against visiting Stanly County on June 3.
The Davie senior led a 16-6 mauling that lifted Mocksville to 3-4 overall and 2-0 in the Southern Division. It was the third straight win.
“I was coming off that (1-0 first-round loss) from Butler, and it was a mental slump,” Bodenhamer said when asked about his turnaround.
In the first inning, Bodenhamer hit a moon shot of a home run to turn a 2-0 deficit into a 3-2 lead.
“That thing was up in the lights,” coach Charles Kurfees said. “I kept watching it and thinking: ‘That son of a gun is going over the light pole.’ He launched it. Connor played a heck of a game. He made some good plays at first base, too.”
“Before I went up there, they said he’ll throw you the first one inside,” Bodenhamer said. “I was looking for an inside fastball and got it.”
The teams were tied at 4 after three, but Mocksville broke away in the fourth and never looked back …