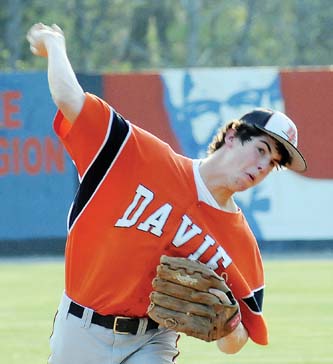 Davie’s JV baseball team wobbled against visiting Reynolds, but didn’t falter.
Davie rallied for a 6-2 win, then blasted visiting Mt. Tabor 10-0, giving it three straight wins and five wins in six games.
A 2-0 deficit after four innings was not what anyone had in mind against lightly-regarded Reynolds. Davie was being handcuffed by a finesse lefty, Hunter Anthony. Davie had runners at second and third with no outs in the first, but Anthony got out of it with three straight strikeouts.
“(Anthony) was decent, but we didn’t have a real good approach,” coach Danny Allard said. “So he held us in check until the fifth inning, when we were finally able to get him out of the game.”
With Reynolds leading 2-0, Anthony got the first batter in the fifth. But Ben Beeson got things going with a single. After Karch Arey walked, both runners advanced on a passed ball. Then both scored on wild pitches.
The rally swelled into a tidal wave. After walks by Nathan Howard and Andy Lewis pushed across the go-ahead run, Ty Marshall broke Reynolds’ back with a two-run single.
Marshall’s one hit in three at-bats was certainly timely.
“He has been in one of those ruts that when he did hit the ball well, he was hitting it at somebody,” Allard said. “He was swinging the bat real well in practice the last couple of days, so hopefully he’s making a turnaround.”
Beeson (2 for 4) had two of Davie’s four hits. Hunter Aref (1-2) had the …