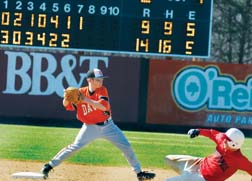 Just as coach Danny Allard sensed when the season began, the Davie JV baseball team does not miss a beat when Allard goes to his bench.
In an 11-1 home win over Oak Ridge Military, Ross Hoffner batted for the first time in the fifth and final inning and responded with a single. He had been at second base all game, but he didn’t bat until Allard dropped the DH. Later in the fifth, Jacob Barnhardt came off the bench and promptly banged a single that triggered the 10-run mercy rule.
In a 14-9 home win over East Rowan, Allard turned to Charlie Muchukot as a pinch hitter. The result was a two-run single.
Davie’s 2-0 week lifted its nonconference record to 3-1. It got back on its feet after an 8-5 loss to Mt. Pleasant.
“It’s fun coming to practice every day,” Allard said. “The potential these JV players have is …