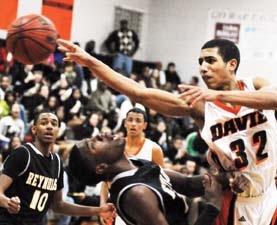 When Mt. Tabor’s varsity boys basketball team carved Davie’s 17-point lead to 52-51 at the end of the third quarter on Feb. 1, a little voice was whispering to Davie, “Not again.”
The War Eagles were supposed to crack against a team that had defeated them 16 consecutive times. But they refused. Everyone was anxious to learn if Davie was a pretender or a contender, and Davie became the latter, slaying an 8,000-pound Gorilla by the score of 80-70.
The win gave Davie (16-3, 5-2) a share of second in the Central Piedmont Conference. How good was this for Davie? It felt too-good-to-be-true good. Tabor (18-3, 5-2) came in ranked ninth in the state, and its only CPC loss was to undefeated Reagan.
“It was just amazing to me,” Davie coach Mike Absher said the next day. “I didn’t sleep at all last night, and it wasn’t from stress, I can promise you that. I don’t use this word very often, but it’s almost surreal. To finally finish the deal against those guys was really awesome.”
Nate Jones continued his extraordinary story. He scored 36 points in the previous game at West Forsyth, and Chapter Two was at Tabor, where he poured in 38 points to help Davie turn the tables from a 75-66 loss in the first meeting. He converted 15 of …